Nagoya, located at the heart of central Japan, has long served as an important transportation hub linking Tokyo in the east and Kyoto/Osaka in the west. Blessed with the fertile Nobi Plain and rich water resources of the Kisosansen Rivers, which contributed to creation of the plain, Nagoya has enjoyed prosperity since the Meiji Period (1868-1912) in industries related to people's everyday lives, such as cotton spinning/textiles and ceramics. To further support these industries, various machine tool industries were introduced. During the early Showa Period (1920s-1930s), aircraft and automobile manufacture also commenced, laying the foundations of today's industries and technology.

After World War II (1945), Nagoya achieved further significant development in the textile, ceramic and automobile industries, taking advantage of the nation's rapid economic growth. With development of the petrochemical, steel, plastic and other materialrelated industries on the periphery of Nagoya, an integrated industrial area emerged, and high-quality industrial products have since been exported to the global market. Thus, Nagoya has served as an engine for growth of the Japanese economy. 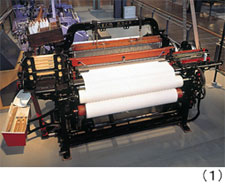 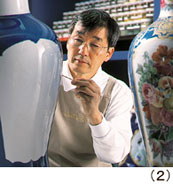 Nagoya's manufacturing tradition has been handed down to the present day. According to Industrial Statistics 2003 by Japan's Ministry of Economy, Trade and Industry, Aichi Prefecture has stood first for 27years since 1977 in terms of industrial output of 35.7 trillion yen, which marks twice as much as the second largest Kanagawa Prefecture. Custom statistics shows that Nagoya Port's trade surplus in 2004 rose about 1 trillion to exceed 11 trillion yen, the nation's largest for 4 consecutive years, which accounts for 43 % of Japan's total.

In the Greater Nagoya area covering Aichi, Gifu and Mie Prefectures, moreover, many products with large market share have been manufactured. Manufactured items with more than 50% market share, in terms of production value, are from a wide range of industries: tiles (94.2%), woolen textiles (86.4%), insulators (79.8%), ceramic tableware (74.8%), car air-conditioners (73.5%), electric/electronic components for internal combustion engines (59.9%), and aircrafts and related components (55.6%). (Source: "Economy in the Tokai and Hokuriku Regions (2002)" edited by Chubu Bureau of Economy, Trade and Industry) 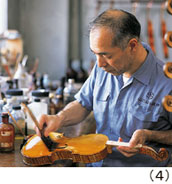 However, dramatic changes in the economic environment, such as during the oil crisis in the 1970s and the high value of the Japanese yen soon after the Plaza Accord of 1985, had considerable effect on the integrated industrial area in and around Nagoya. Since then, the textile and ceramic industries of Nagoya have seen a long-term decrease in the number of businesses, employees and shipment value of manufactured products and goods, though still maintaining a high market share. As a result, there has been growing concern regarding the transmission of such technologies and expertise to the future.

Amid ongoing globalization and technological innovation, every manufacturing industry has been under pressure to develop innovatory concepts. Despite the harsh economic environment, however, many companies in the Nagoya Region have successfully achieved further development through conversion of business lines, or diversification from traditional business, to growing fields such as electronics. As represented by Toyota Motor Corporation and the Morimura Group (Noritake Co., Ltd. etc), it can be said that the finest tradition that can be passed on from previous generations in the region is the capacity for innovation, to constantly create new technologies and products that serve as the driving force of future Japan.

● Profile of Assistant Professor Motonari Yamada:
Born in 1954, Dr. Yamada graduated from School of Economics, Nagoya University in 1977. After earning a Ph.D. in economy from the same university in 1982, he worked for the university as a tutor, and was promoted to assistant professor in 1991. His areas of specialization include production management and the management of small and medium-size businesses. In 2002, Mr. Yamada was appointed Vice Chairman of the screening committee of the "MADE IN NAGOYA" Project by the Nagoya Chamber of Commerce and Industry.